“I know where I came from, and that is something I will never forget,” said Senator Bernie Sanders to a crowd of 13,000 in Brooklyn, New York. Sanders was telling his origin story. Part of that story includes his father, Eli, who immigrated from Poland to the United States in 1921. Many members of Eli’s family were killed during the Holocaust.

Though Bernie Sanders doesn’t talk about his Jewish heritage often, he has repeatedly emphasized that he is proud to be Jewish, and that being Jewish has had a profound impact on his life.

In 2016, Sanders said this during a Democratic debate with Hillary Clinton:

Look, my father’s family was wiped out by Hitler in the Holocaust. I know about what crazy and radical and extremist politics mean. I learned that lesson as a tiny, tiny child when my mother would take me shopping, and we would see people working in stores who had numbers on their arms because they were in Hitler’s concentration camps.

I’m very proud of being Jewish. And that’s an essential part of who I am as a human being.”

Sanders spoke again of his Jewish roots in 2020, linking the rise of Naziism in Europe to the rise of white nationalism and other forms of bigotry in the United States:

“In the neighborhood where I grew up, the people had tattoos on their arms from having been in concentration camps. I learned at a very early age what, if you like, white nationalism – which is what Nazism is in the extreme – is about. I think at a very early age I learned that it is absolutely imperative – not just me – that all of us do everything we can to stop racism and white nationalism.”

Unfortunately, the prospect of electing the first Jewish President in the history of the United States has been met a series of anti-Semitic demonstrations.

On March 16, 2019, Sanders held one of his trademark rallies in Henderson, Nevada — thousands of attendees and a long stump speech focused on his campaign’s platform.

However, just outside was something you don’t generally see at a Sanders event: a protestor carrying a swastika poster. This protestor was part of a small group of President Donald Trump supporters.

Surprisingly, this story didn’t get much coverage in the media. It was an afterthought in this article published by The Nevada Independent.

The media’s apathy regarding anti-Semitism directed at Sanders became a small recurring theme over the course of the primary.

A frenzy about Sanders’s three houses — one residential home in Vermont, one in Washington D.C. for work, and one lake house in Vermont paid for by an inheritance his wife, Jane, received — culminated in a story published by Politico titled “The Secret Of Bernie’s Millions”.

I’ll save you a click: the secret is that he wrote a couple best-selling books and has received a decent annual salary working as a public servant for thirty years. 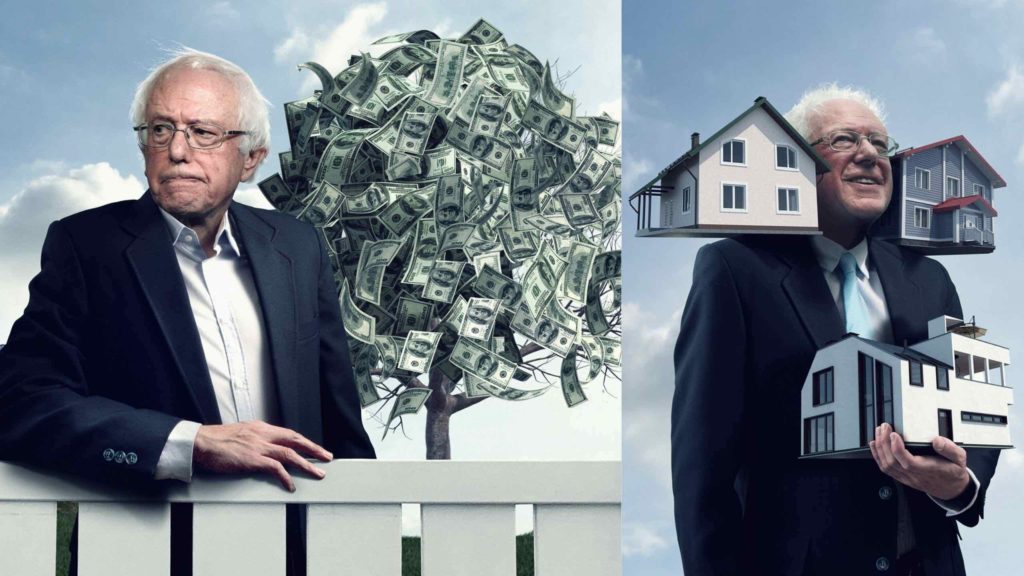 Ignore for the moment that these houses don’t really look anything like the homes Sanders owns. Instead, think about the anti-Semitic trope: a Jewish man with a mass of hidden wealth.

Many were quick to notice the — at best — poor image choice, including Democratic Congresswoman Alexandria Ocasio-Cortez:

Can ⁦@politico⁩ explain to us how photoshopping money trees next to the only Jewish candidate for president and talking about how “cheap” and rich he is *isn’t* antisemitic?

Or are they just letting this happen because he’s a progressive politician they don’t like? pic.twitter.com/O9qvDBw4ib

Politico wasn’t the only media outlet to cover Sanders and his campaign in such an absurd way. The day before the New Hampshire primary, MSNBC anchor Chuck Todd cited a piece which referred to Sanders supporters as a “digital brownshirt brigade.” The piece was published in a right-wing website founded by Bill Kristol and Charlie Sykes.

“Brown shirts” is another term for the Sturmabteilung, the paramilitary wing of the Nazi Party. Likening the online behavior of a minority of Sanders supporters to the organization that, through discrimination, violence, and terrorism, helped Adolf Hitler rise to power is journalistic malpractice.

Not long after, MSNBC anchor Chris Matthews compared the Sanders campaign’s victory in Nevada to the Nazi takeover of France in World War II. Matthews apologized on-air shortly after, just before leaving the network amid sexual harassment allegations.

While cable news media has been quick to compare Sanders and his supporters to Nazis, they’ve been reluctant to cover it when actual Nazis disrupt his events.

On March 6, 2020, a protester unfurled a large Nazi flag during a Sanders rally in Arizona. The protestor was quickly removed. 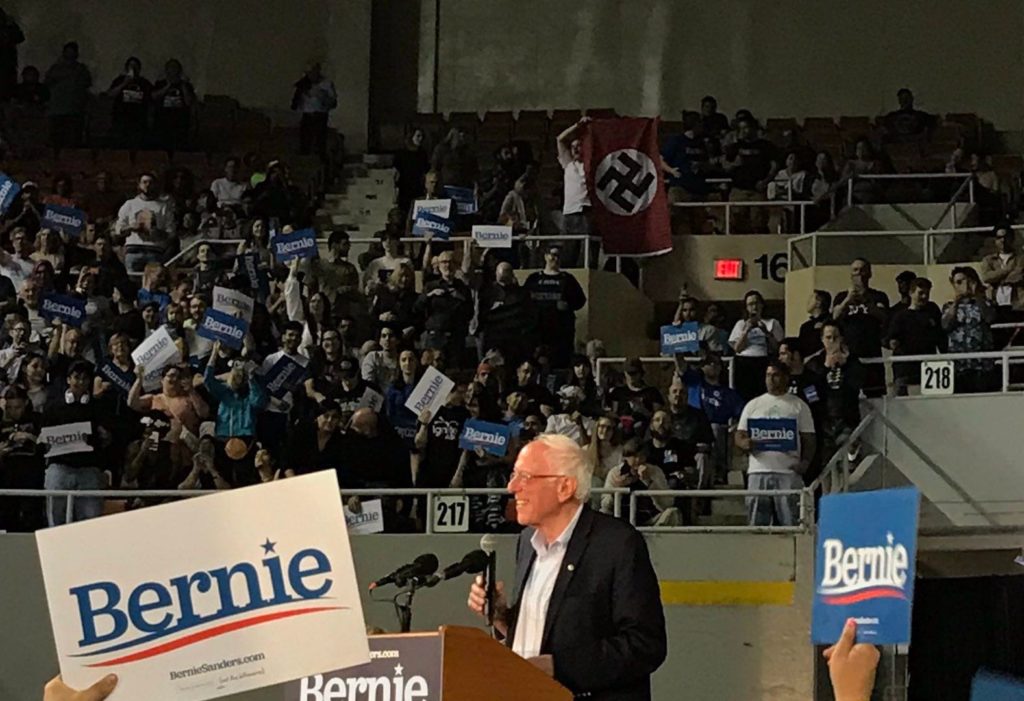 “As someone whose family was wiped out by Hitler and as an American, to have in this country somebody bringing forth the most detestable symbol in modern history is unspeakable.”

I don't care who you're supporting, attacks like this against a man who could be the first Jewish President are disgusting and beyond the pale. Hatred and bigotry have no place in America — and it's up to all of us to root out these evils wherever they're found. https://t.co/Q1Pz3hRUDS

I am outraged by the act of anti-semitism targeting @BernieSanders and his supporters. To raise a Nazi flag against Sanders or any member of the Jewish faith is disgraceful and unacceptable. We condemn this act of white supremacy and stand against hate in all its forms.

While the story predictably went viral on social media, the cable news networks carried on as if nothing significant had happened.

The most recent display of anti-Semitism directed at the Sanders campaign occurred at a campaign office in Florida. The office was vandalized with swastikas and a spray-painted message: “voting didn’t stop us last time.”

💔😢 Didn’t know if we should share, but one of our grassroots Bernie offices in Florida was vandalized with swastikas. Sheriff sent a team to clean it up. But Bernie is just another old white man, right? pic.twitter.com/zRFxdTBKKQ

Unfortunately, this wasn’t a standalone incident. The nearby Guatemalan-Maya Center was also vandalized with anti-Semitic iconography less than a week earlier.

Why This Is Important

With no strong public repudiation of anti-Semitic demonstrations and attacks, they will only continue to escalate. Bernie Sanders doesn’t have Secret Service protection, and just last year a man was convicted for threatening to “behead” Sanders in a voicemail which included anti-Semitic language.

Our elected officials and our Fourth Estate need to adequately address the rise of anti-Semitism. In my view, they are failing to do so.