Much has been made about Beto O’Rourke finishing within a razor thin margin of Ted Cruz in the 2018 Texas Senate race. Texas, which hasn’t seated a Democratic Senator 1993, has been a historically red state. The Republican candidate for President has won Texas in every election since 1980.

So when Beto O’Rourke threatened to flip the seat and defeat one of the GOP’s most prominent Senators, it made a lot of headlines. Beto O’Rourke became a prominent political figure in 2018 thanks to extensive media coverage and endorsements from many major Texas newspapers including the Fort Worth Star-Telegram, Houston Chronicle, and Dallas Morning News.

Heads really began to turn when Beto was polling within the margin of error versus Cruz — a statistical tie. Many were eager to see Ted Cruz, one of the least popular Senators in the country (-25 net favorable), lose in what is considering one of the most conservative states in the country.

Unfortunately for Beto and Democrats nationwide, that’s not how things played out on November 6, 2018. Cruz secured 50.9% of the vote, edging out Beto by 2.6%.

Beto may have outperformed the polls, but he didn’t really outperform Democrats nationwide. Nationally, Democrats outperformed Hillary Clinton’s 2016 results by about 5%. In 2016, Clinton received approximately 43.25% of the vote — 5.25% percent less than what Beto received in 2018.

Perhaps the only impressive aspect of Beto’s campaign was his ability to fundraise. With the help of former Bernie Sanders staffers, Beto ran a Bernie-esque grassroots campaign that smashed fundraising records. Beto raised more than $78 million, more than any other Democrat. He didn’t take a nickel from corporate Political Action Committees either.

Beto brought in significantly more money than Ted Cruz, who only raised $40 million in 2018. In 2018, Beto spent $25 million more than Ted Cruz.

It’s not as if he was running against a tough opponent either. Ted Cruz has a net negative favorability (-1) in his home state. 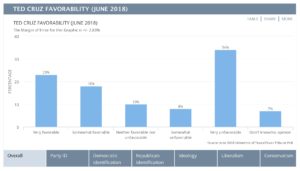 However, if you take a closer look at the Senate election history in Texas, you’ll find that Cruz is a relatively weak candidate.

In 2012, Ted Cruz was elected to replace Kay Bailey Hutchinson, who represented Texas as a Senator from 1993 – 2012. She won four Senate elections in Texas, never receiving less than 61% of the vote. 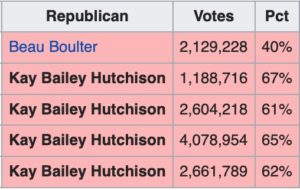 It’s natural to expect some drop in support when a new candidate runs to fill the seat of a popular Senator. However, Cruz performed very poorly in 2012.

Despite outspending the Democratic challenger Paul Sadler 28:1, Cruz only managed to win 56.6% of the vote. That’s 5% less than Hutchinson secured in 2006.

In 2018, Ted Cruz was outspent by millions of dollars. He was unpopular within his own state and his opponent, Beto O’Rourke, received nothing but praise from mainstream media outlets. Despite all this, Cruz still won Texas. His opponent didn’t even outperform Democrats nationwide.

For these reasons, Democrats should be concerned about Beto’s electability in a 2020. When Beto hinted at a 2020 run, many Democrats got excited. He was recently endorsed by Martin O’Malley, who ran for President in 2016.

Let me make this clear — if Beto O’Rourke runs for President, Texas will not be in play. Donald Trump has higher favorability ratings among Texas voters than Cruz does. A Democrat hasn’t won Texas in a Presidential election since 1976. Donald Trump has the incumbent advantage. Shifting demographics won’t be enough to make up the difference by 2020.

Furthermore, it’s difficult to know how Beto O’Rourke would even appeal to Rust Belt voters. He doesn’t have the name recognition of Joe Biden or Bernie Sanders, and he doesn’t have the best record with unions.

In 2018, the Texas AFL-CIO initially declined to endorse Beto O’Rourke because he didn’t show up to one of their conventions. It took a special meeting among board members to reverse the decision, which happened about a month later.

O’Rourke also expressed his intent to fast-track TPP, a trade agreement that wasn’t popular among many working class voters in the Rust Belt. In 2016, Trump railed hard against TPP and other trade deals, a message that surely paid off at the polls.

Beto O’Rourke’s strengths in 2018 were twofold — grassroots fundraising and getting a decent number of unlikely voters to the polls. Rather than trying to flip Texas at the expense of states that are actually winnable in 2020, the Democrats would probably be better off leaving Beto in Texas, where he can build up the state’s Democratic Party, continue to fundraise where he’s most popular, and continue to bring to new voters into the political process.